College Park has been affirming and welcoming of all for many years. Our LGBTQ-friendly church has many LGBTQ members, in addition to gay/lesbian ministers, deacons and staff members. In 2000, Michael Usey’s Bible & Homosexuality Study provided important conversations not only for our members, but for the community and across the world. In early 2012, we fought hard against passage of Amendment One in NC. In 2016, we fought for the repeal of HB2 and held a rally more than 1,000 packing the sanctuary (see videos below). We perform same-sex weddings, and welcome many that have been beaten up by the Bible at other churches! The photo above shows three wonderful weddings at College Park, including our Associate Minister Lin Story-Bunce and her wife Caryanne in 2014.

Watch the finale of the Rally Against HB2 at College Park on April 3, 2016 with an overflow crowd and plenty of excitement (read more about HB2):

Grammy winner Rhiannon Giddens and friends sing at the Rally Against HB2:

The Fight Against Amendment One (2012) 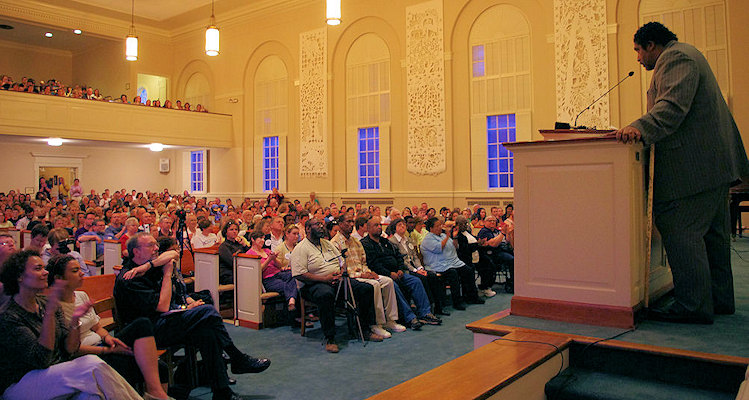 In April 2012, College Park held a citywide Rally Against Amendment One (photo above) that drew 700+ to hear Dr. Rev. William Barber, President NC NAACP. We worked with other faith leaders in the community to fight the passage of this Amendment to prevent same sex marriages. While the Amendment as passed in the state (but defeated in Greensboro), it was ruled unconstitutional in 2014.

Our Rev. Michael Usey preached several sermons against it. Listen to one below from February 2012. “Prejudice and discrimination against Lesbian/Gay/Bisexual/Transgendered persons is morally repugnant and the very opposite of God’s love.” – Rev Michael Usey

Also see our Bible Study: The Bible and Homosexuality.

Dr. William Barber preaches at our Rally Against Amendment One, April 17, 2012

College Park Resolution Against Amendment One (Amendment to the 14th Article of the NC Constitution)
Voted unanimously by members of College Park Baptist Church, March 14, 2012

College Park has a long history of standing against discrimination. Just after the historic Greensboro sit-ins in February 1960, College Park adopted the following resolution:

1960 Resolution in Response to the Greensboro Sit-Ins

Believing that Baptists have historically embraced a way of life and faith which recognizes that the worth and dignity of all persons is at the core of the Christian’s outlook toward his fellow man; and believing that the moral fiber of our community is strengthened by the willingness of Christians to stand against social injustice, we make the following relative to our position on the refusal of service to orderly patrons of food service establishments: