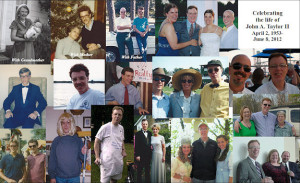 John A. Taylor II: Jesus’ Urbane Disciple
Memoir by Michael Usey
May 16, 2012
John was a one-of-a-kind.  Or at least I’m tempted to think so, but then I wonder, did Jesus himself have an urbane disciple like our John Taylor?  One of the twelve who could cut to the heart of an issue with a rapier wit and wry smile?  A disciple who had strong opinions about the other eleven’s choice of tunics and footwear?  Did one of the Twelve have   the polish and suavity of a sophisticated social life in major cities of first century Israel? Perhaps Matthew, the tax-collect, was as cosmopolitan.  One who loved his mother, his partner, his garden and beauty?  I like to think so.

When I think of John, I think of his sense of humor, his soft heart and love of family, how he knew who he was, yet how he could adapt and evidence true resiliency.

This tall, lanky gentleman quietly entered most rooms, and didn’t announce himself.  But he was the type to, after a bit, lean over and quietly whisper some wry, sardonic wit in your ear.    He had one excellent though dry sense of humor.

Many times, John could look you straight in the eye and not break his poker face while he delivered some completely ironic statement.   You could merely see the tiny twinkle in his eye.  Other times, when he was particularly pleased with or enjoying some joke he’d made, he couldn’t help but break into a half smile. Back when he was an active choir member,  during times of sharing at the end of Wednesday night practices, choir members would share both concerns as well as laughter over the vagaries of the week, and John offered some one-liners that caught people off guard and disarmed them up completely.  One of the families in our congregation went homeshopping with John as their realtor, and loved to hear John’s funny and insightful comments about the homes they visited together. They said, “ We rode around with him for hours when he showed us houses.  When we saw awful, particularly tacky decor he would make a sly, dry observation that would make us laugh.  He would come to our house when we were gone to meet workers, and our dog loved him when we were around, but would block the stairs and growl at him when we weren’t.  For this habit, our dog earned from John the nickname Sybil.”

John often came off ironic, seasoned and tough, but he actually had quite a soft heart.  Despite leading in like he was a cynical, tough guy; friends quickly found that he actually had a mellow, teddy bear inner side.  You sensed it when he spoke of what really mattered to him.   Things did bother him.  He felt at core deeply sensitive, and certainly cared a lot if people were upset with him.  And he could be very generous.  A family told me that “ as a house-warming present for our house, he paid to have all of the locks in the house re-keyed.  A thoughtful, and practical gift that we would have fully intended to do, but would no doubt never get around to.”

John loved to garden and he loved beauty.  A deep love of beauty is too rare a quality these days in the followers of Jesus.  One female friend of his told me: “Wes and John planted evening primrose in their backyard.  They bloom at dusk and one by one; they pop open all of a sudden.  I went out to see this phenomenon with Wes and John, and we stood outside oohing and aahing as each plant would shiver slightly and then burst into its full glory!  It was incredible–some beautiful holy moments indeed.   We were certain that if anyone heard our vocalizing (oooo, oooh, wow, OHHH , big gasp, ahhhhhh!), they would decide that we were engaged in something other than watching flowers bloom!”

It also became clear to the choir members that, when he couldn’t make Sunday mornings, it would usually be due to his commitment to visit his mother quite regularly–despite thick or thin, especially when he sensed that she needed him.  His love for his mother was unparalleled.  He seemed resolute in his commitment to their deep and lifelong friendship. Wes will share for you in a moment as John’s partner.  John’s love for and commitment to Wes through thick and thin—and they had to negotiate some incredibly huge changes—is inspiring to us all.  Funny how so many people recalled John for those unlikely paired qualities:  a deep heart—alongside an ability to poke fun gently at himself or others.  But that sense of humor, along with his big heart, helped see him through his life quite effectively.

John’s life hadn’t been easy.  He had a variety of challenges thrown athim: changing jobs (from Bank of America to realty to teaching, and back to realty), changing realities, a stroke, cancer, his mother’s health, etc.  Yet I grew to see and admire two more qualities about John: how, despite a medley of major life changes, he managed to stay grounded, while also demonstrating a core resiliency—a tenacity to negotiate whatever life threw at him.

John knew how to be urbane and could banter with the best of intellectuals.   If you watched him interact with people, there was this uncanny sense that John could be mistaken for a part in some New York cocktail party scene of a movie.  But if you watched closely for any length of time and zoned in on the conversation, you’d find that John actually wasn’t interested in pretense.  He knew who he was, and he wasn’t ashamed to be a North Carolina boy from Onslow County.  I liked that about him.

When Wes began to explore his spirituality, it took him in some places that it did not for John.  Once, my wife Ann asked John about the changes that Wes’ religious journey was taking him through.  “John, how do you feel about and deal with Wes’ changes?”  she asked outright.  “Does it cause you conflict?”  His answer impressed Ann with its honesty and sincerity.  “I’ve told Wes, that what he is attracted to is not necessarily what I am.  Maybe I’m just a traditional Christian, but this is how I was born and raised, and it still is who I am down deep.  I’m okay with that.  Wes needs to do what he needs to do, but that doesn’t mean I have to feel the same way.  In fact, I can’t.  That’s just not who I am.”

These core affirmations represented the best in John:  first, he knew who he was, and wouldn’t change that out of pressure by others, even loved ones. Secondly, he was willing to let Wes change in ways that many might have been freaked out by.  But John was more gracious than that; he didn’t demand conformity just because it wouldn’t be threatening to him.  He told Ann, “I’ve told Wes that he needs to do what he needs to do.  But that didn’t mean I had to change similarly.”  That’s what good relationships give each other.  They honor the right of each to pursue what is authentic for each, without judging, censoring, or pressuring.  John had that right mix.

That creative ability to be resilient through life’s changes, whether with relationships, jobs, or health, proved to be profound in John’s case.  He managed to honor his relationship with Wes through real changes in them both over time; he similarly managed to renegotiate his career when life demanded it of him.  When his realty market was drying up with the tanking economy, he looked into a career that was related.   He took classes to teach and made a whole life chapter that worked out for that phase.   He was open to suggestions, he pursued the necessary resources, and hemade it happen.  It wasn’t without the normal misgivings or occasional fears or insecurities, but he didn’t just sit on his duff.   He went out of his comfort zone, and changed as life required of him.  I admire that about John.  Finally, his health changed—taking some turns for the worse.  He faced more health ordeals and long dark stretches than most of us would care to even believe, but he stayed grounded and usually kept his sanity-giving humor—to the end, as I discovered when I visited with him a week before he died.

For me as a pastor, John and Wes were most excellent models of people of faith.  They joined in the late 1990s, and they were part of a group of people who demonstrated that being a Christian and being gay were not incongruous. John and I had lunch a year ago, in which he told me how much he missed singing in choir, his voice being gone since his stroke.  I told him how much I appreciated all he and Wes had done to help our church in our journey of becoming fully accepting and affirming.  It was people like John and Wes who opened themselves up to others in our congregation that helped us take the next step.  Because of their vulnerability, love and faithfulness, others came to know that there is not such thing as gay Christians or straight Christians, but just Christians one and all.

One of our deacons, Matt Cravey, wrote me this week (and I share with his permission): “ I can tell you the most important thing that John and Wes did for me.  I had not spent much time with gays or lesbians growing up, especially not in church.  I was always told that slick and ambiguous phrase “Love the Sinner, Hate the Sin.”  For a while I struggled with what that meant, but never came to a satisfactory answer.  Shortly after coming to College Park, Wes and John stood up at the front together when they joined.  I said to Nancy, I don’t think they are brothers, and she gave me a look that silently conveyed, You sir, are an idiot.”

“In that moment, watching them stand together in front of the congregation and seeking membership, I could no longer be ambivalent about how I thought about or treated gays or lesbians.  They were just two more people who wanted to be part of the church.  That was a transformative moment for me.  I realized that if I was going to stay with this church that was quickly becoming our family away from home, vague answers and ambivalence about discriminationin the name of Jesus could no longer be the norm.”

Matt continued: “As always in these situations, I wish I had been a better friend, more open, and a thousand other regrets about things I missed and will miss.  I hope that Wes and John both know that by the mere act of standing together, they started a shift in the way I thought about the church, gay couples, God’s grace, and the kind of person I want to be.”

So, today, for those life-sustaining qualities, we shall remember John’s life and spirit fondly—and honor him as we envision God welcoming him into whatever is next.  His difficulties are at last over; his memory and love will remain. John Taylor was unique; he was a one-of-a-kind individual.  We are richly blessed for having known him.